I’m mildly annoyed that Demolo still isn’t on Oculus Go yet, but I’ve been spending the past month addressing player feedback from the WebGL prototype. There is one last new feature I’m considering; make sure to read about it at the end and tell me if you think yea or nay. 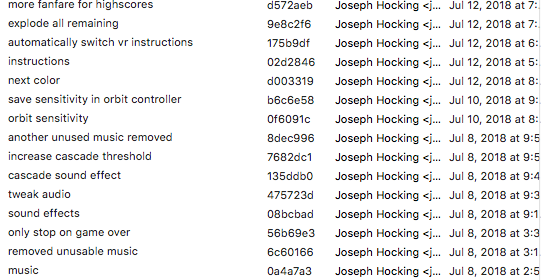 Just to give a sense of how I’ve been responding to player feedback, here’s a partial list of changes I’ve made in July: added sound effects and music, orbit sensitivity setting, display both current and next color, show instructions, improve fanfare when getting highscore, watch all blocks explode on complete, start at any level 1-9. Whew, and this doesn’t even include fixing assorted bugs the people have reported.

I have also been working on porting to VR at the same time, which involves 3 main tasks: implementing HMD controls, adjusting the UI for VR, and replacing mouse with the controller. I’ve mostly finished the first two and am working on the third. Adjusting the UI mostly meant switching it to a World Space canvas parented to the camera (this is a Unity-specific thing). The HMD controls are more interesting; the camera actually orbits around the blocks, rather than the standard VR head movement. Implementing this was non-trivial, because the default HMD control I had to override is of course standard head movement.

Finally, there is one last new feature I’m considering and want feedback on. Some players have said they don’t rotate the view while they play, which surprises me since I rotate a lot, but hey multiple players have reported that. I have come up with a mechanic to incentivize rotating the view, by having bonus blocks that appear in random locations, but I’m unsure if I should do that. At first it was alarming that some players don’t rotate the view, but on reflection, does that really matter? The option to rotate the view is there, and if not everyone does, who cares? On the other hand, the 3D aspect is the big innovation here over other block matching games, so shouldn’t I push that?